Antibiotic resistance in Africa: ‘a pandemic that is already here’

In 2016, doctors in Gambia became alarmed about two apparently different outbreaks of hospital-acquired bacterial infection in a neonatal ward in Banjul. Baby after baby receiving non-intensive care at the Edward Francis Small Teaching Hospital ended up with infections that did not respond to normal antibiotic treatment. Many died of their illnesses.

Local investigators at the Medical Research Council (MRC) unit of the London School of Hygiene and Tropical Medicine used whole-genome sequencing — a technology rarely available in poorer countries — to identify the cause. They found it was intravenous fluids and medications that had been contaminated during preparation.

Some 1.27mn people died of antibiotic-resistant infections in 2019, according to modelling recently published in the Lancet — much more than previously thought and about the same death toll as malaria and HIV combined. The paper found that the burden was highest in west Africa, where it estimated there were 27.3 deaths per 100,000 directly related to antibiotic resistance. That was more than four times higher than the ratio in Australasia, the best-performing region.

Darboe, a microbiologist at the MRC unit in Banjul, says one of the main problems in west Africa — and sub-Saharan Africa, more generally — is the lack of diagnostics, meaning most infections go undetected. “My lab is the only quality-assured lab in the country,” she says.

As well as killing people, antibiotic resistance increases the cost of healthcare by causing patients to stay longer in hospital or to buy more expensive second- or third-line medicines, Darboe adds. Often, however, these drugs are beyond the reach of poorer patients. Many skip treatment or use cheaper drugs that may not be effective.

A combination of drug-resistant pathogens and poor hygiene protocols in some facilities can even mean that something as seemingly simple as a tooth extraction deteriorates into a lengthy and costly infection, she points out. “That especially affects patients in this part of the world where poverty is really a huge problem.” 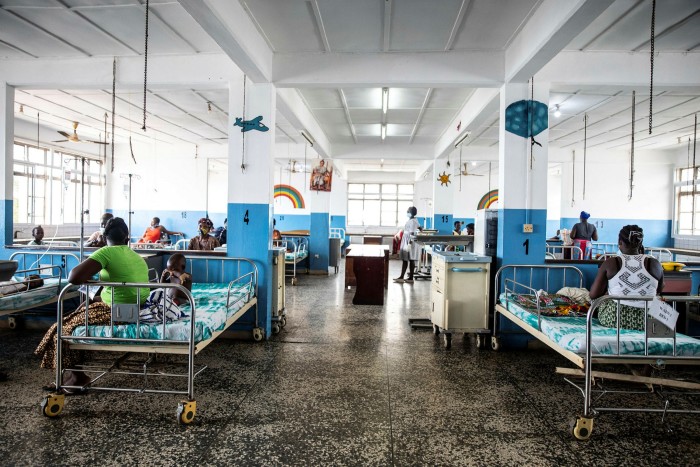 Yewande Alimi, antimicrobial resistance programme co-ordinator at the Africa Centres for Disease Control and Prevention, also highlights the lack of laboratories and surveillance systems. “For a long time, policymakers struggled to get to grips with what AMR is,” she says, welcoming the Lancet report as an important step. “AMR is like climate change. Until you experience it, it seems like something far away. The more we know about it and its medical and economic impact, the more we can begin to tackle it.”

The causes of AMR, particularly in poorer regions such as west Africa, are well understood — if no easier to deal with for that. They include poor sanitation, inappropriate and excessive use of antibiotics in humans and animals, as well as an empty pipeline of new antibiotics from pharmaceutical companies focused on more profitable areas of research.

In much of Africa, there is an additional problem: counterfeit medicines. In Idumota market, just back from the waterfront on Lagos Island in Nigeria, it is easy to find fake “branded” medicines among the thousands of lock-up shops. Customers go there to avoid costly medical consultations — particularly if they assume they need repeat prescriptions of medicines they have already taken.

Unfortunately, counterfeits — locally produced or imported from China, India and elsewhere — are rife. The World Health Organization puts the value of fake medicines sold each year at an astonishing $200bn, equivalent to 10-15 per cent of the legitimate market. “Fake medicines are really a big concern across the continent,” says Alimi. “This drives antimicrobial resistance in our countries and we need effective legislation around drug production and drug importation.” A shop selling fake medicines is raided by officials in Abidjan, Ivory Coast, in 2017 © Issouf Sanogo/AFP/Getty

Walter Fuller, technical officer for antimicrobial resistance at the World Health Organization’s Africa office in Brazzaville, says that tackling AMR demands a “one-health approach”. Only by improving the quality of whole systems — from farms to hospitals, from prescribing norms to hygiene practices — will any decisive impact be made.

One initiative that could help is the establishment of an African Medicines Agency — a treaty for the creation of which came into effect in November. Advocates say the AMA ought to reduce the proliferation of counterfeit medicines as well as facilitate the production of safe local medicines by establishing a common regulatory framework.

Experts also propose the standardisation of guidelines, so that doctors take a more consistent and effective approach to prescribing antibiotics according to proven protocols.

Even small initiatives can make a dent, says Fuller at the WHO. In Lagos, in combination with an NGO called DRASA, the WHO has trained 300 youth champions in 10 schools to spread the word about good hygiene and sanitation — a message that has been emphasised by the fight against Covid-19.

But, as with Covid-19, Fuller says the emergence of infections resistant to treatment is a global phenomenon that can rapidly spread from one part of the world to another. A breakthrough infection in Nigeria or Senegal can quickly move to other parts of the world, he warns.

“You could address AMR however you want in the [global] north, but AMR has no borders, so a global partnership is very important.” Fuller has no doubt about the seriousness of the threat. Imagine, he asks, what would happen if a strain of a disease such as tuberculosis or malaria became entirely resistant to drugs.

“When Alexander Fleming discovered penicillin it was a game-changer, it revolutionised modern medicine,” he says. “Now we are at a place where, if we don’t do anything, if we leave this on the back burner, we might roll back our gains. And then our health systems, particularly our weak ones, simply might not be able to cope.”